A downloadable game for Windows

Marine has a dream to become a real pirate, but she need a real ship to start her pirate career! You as her manager (also her first pirate crew) have to help marine to make money and complete her ship!

A small game with around 10-30 minute game play time. I put some small easter eggs to give some laugh for the game! please try it out and let me know you impression!

My first ever game, made with Unity engine with no C# code making and only visual scripting.

I based this game on some popular DLsite game mainly on clicking and managing, but due to lack asset i can only make small scale one.

UI and some pixel Art i made myself and some are free asset, and the BGM are a rough edit of Marines' instrumental song and some other, and ending music box arrangement by R3 Music Box

The game has no save files, your progress will continue if you push the play button in main menu, but it also have reset button to return your progress to default first time play. The game also has no resolution change setting and will play on full screen 1980x1020, only BGM volume settings are available. I'm sorry, i don't know how to code....

it pretty fun and cute Alpha, I like how it have the theme + laugh of Pekora in the near end of the game. :3

Thank you, I glad you like it. Altough i have no plan to further improve the game as it is my first time making game and this is like a trial for it, maybe in the future? when I have more free time and improve my skill i can make the improved and more deep game for this.

I liked the pixel art you used as well as the UI and music selection. The game is quite easy to beat and there's not much challenge after you recruit a second member, but it's still enjoyable to play.

- The status screen is missing a close button. The game somehow stays there for a while and then sends me back to the title.

- Avoid having the default volume at 100%. It's loud. I suggest having it at 50% and then the player can adjust it to their liking.

- It would be nice if the BGM didn't change every time you change screen. The main gameplay loop requires clicking between screens quite frequently and it's not very enjoyable to have the BGM cut every 5 seconds. I'd suggest adding a playlist with two or three songs that loops in the back while the player is in the "main" gameplay screen.

- There's not much to do after you get all talents and shop items. Maybe consider adding more upgrades in the shop (relatively expensive ones) to speed up the construction speed.

- Tax is only a threat at the start of the game. Once you have a second talent in the team, you make so much money that tax becomes irrelevant. I would probably make the tax increase a bit faster to make the player think a bit more carefully where to spend the money.

For a first game, you did a very good job! I'm sure you'll keep improving and surprise the community with new amazing games! :D

I also agree about the art, @tengnose1988 is a pro at pixel art, and i take no credit for it.

I make the game simple as this is my first game and my lack of assets and resources is the other problems, also for the first game i don't want to go overboard and to complete the game itself is my main objective.

Regarding the status screen i forgot it doesn't have any button to close but i make the right click command to close it.

The BGM change for every scenes i use, i also think it's a little annoying to hear that loop, hence my idea to make the main scene have different BGM every time you return to it, maybe it's not a good idea to make the shop and jobs in separate scenes.

Thank you very much for your impression and suggestion, it means a lot to me. 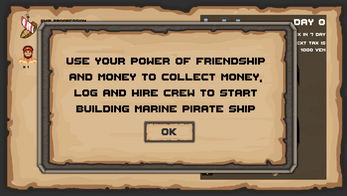 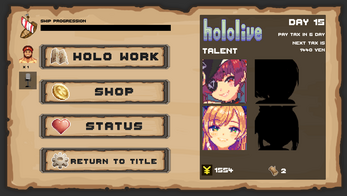 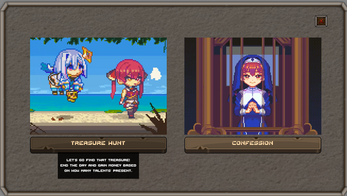